Success stories of some of our women at Shoshana sewing centre, Vijayawada. 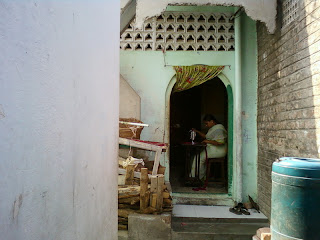 She is a Christian, aged 33 yrs. Illiterate housewife. Husband was an electrician. They have a small  two roomed house of their own. Rajani has three daughters all below 13 yrs of age. She was married at a very young age and has been taking care of the children since then. Even though they are very poor she was not allowed to go out for work. Her husband didn’t like her working outside. Her husband was the only earning source for them. Only last year she was allowed to learn stitching at Hemima’s place since she is residing close to her. She turned out to be a very good student. 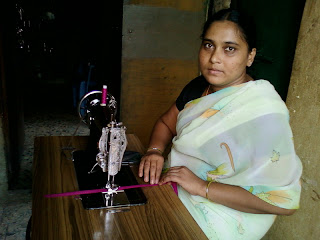 Sadly 4 months back her husband died of an accident. He was working at their neighbours house and got electric shock and he got major burns. He was in the hospital for a few days and died. Rajani was in  a total depression. She has no education and on top she was at home all these years and now She has to take care of the house. Both her parents and in-laws are very poor to support her. Now her husband being the only son of his parents, they also depend on her. She was in a total confusion and she tried to commit suicide but somehow saved. 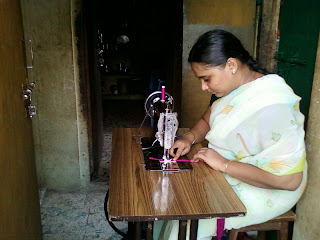 Hemima was constantly checking on her. She almost finished her stitching class and with the encouragement of Hemima she started her own work from home as a tailor. Now she is earning minimum 100 rupees per day. She is very happy now that she could take care of her children as well as her in-laws. Her mother in law is helping her in the household while she is working and her father-in-law is also helping her a little bit working as  a daily worker. Her children are going to a Government school but she is very happy that she could take care of them herself instead of sending them to a hostel. She is very grateful that she had the opportunity of utilizing the sewing class with which she could help herself as well as her family.
By Bindu Katta - November 13, 2011