Details of one of the previous students at our Sewing project in a area called Nagaralu, Guntur. 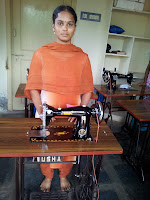 Name of the student: Sireesha

She is a 22year old woman. She is single  and school drop out. She is living in a rented house with her parents, and one younger sister and brother.


Her father is a Barbar. She lost her mother when she was a child. Her father got married again. She had to stop her school because she was forced by her step mother to take part in the household work and also had to care of her younger sister and brother.
She considers herself as a neglected child by both her parents.

She is still very much mistreated at home and there are regular instances where she was not even given food.
In this situation she had the opportunity of having a free training in tailoring at our Shoshana sewing centre and she utilized the time properly and finished her training.

She finished her training in last March -12 and she was provided with a sewing machine recently.  In the meantime she started stitching clothes at our centre for more practice and also to earn some pocket money for herself. 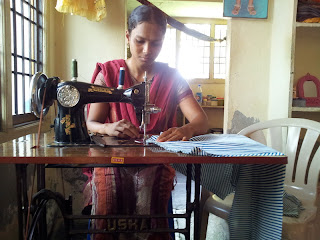 Now since she got her own machine she started her work from at home but she still have problems at home. Luckily her marriage is fixed and she is going to get married soon. I hope she will get support from her husband and she will be successful in using her skill for her better ment in life.
By Bindu Katta - July 18, 2012